THE ROSS'S PORTRAIT PRIZE AT THE ROYAL ULSTER ACADEMY

The Royal Ulster Academy once again presents its much anticipated annual exhibition of works from academy members, invited artists and pieces entered through open submission. This year marks the 135th installation and boasts a host of high profile artists such as Robert Ballagh, Kyle Barnes, David Crone RUA, Rita Duffy PPRUA, Denise Ferran PRUA, Graham Gingles RUA, Vera Klute, Rosie McGurran RUA, Marcus Patton VPRUA, John Rainey, Dermot Seymour ARUA, Anushiya Sundarlingham and Jennifer Trouton RUA.
The Royal Ulster Academy began as The Belfast Ramblers’ Sketching Club in 1879, and has in its 100 plus years striven to promote both traditional and contemporary artists. The event as always includes an educational element, running guided exhibition tours, workshops, artist talks and lectures. It takes place from the 14th of October 2016 until the 8th of January 2017 at the Ulster Museum, Botanic Gardens, Belfast, BT9 5AB.
Each year Ross’s proudly sponsors the prize for portraiture within the exhibition, and each year we are pleasantly surprised at the raw talent that exists within this field. Our 2016 winner, Jackie Edwards, is no exception. The emerging artist has impressed both the Academy and our in house valuers with the preciseness in which she is able to capture the likeness of her subjects.
Edwards uses a classical technique of applying multiple layers of translucent, semi-opaque oil glazes over an opaque monochromatic under-painting, in either oil or egg tempera, in order to achieve the glossy look that typifies her portraits. This enables her to not only achieve a realistic appearance in her paintings, but to also capture the inner character of the model. 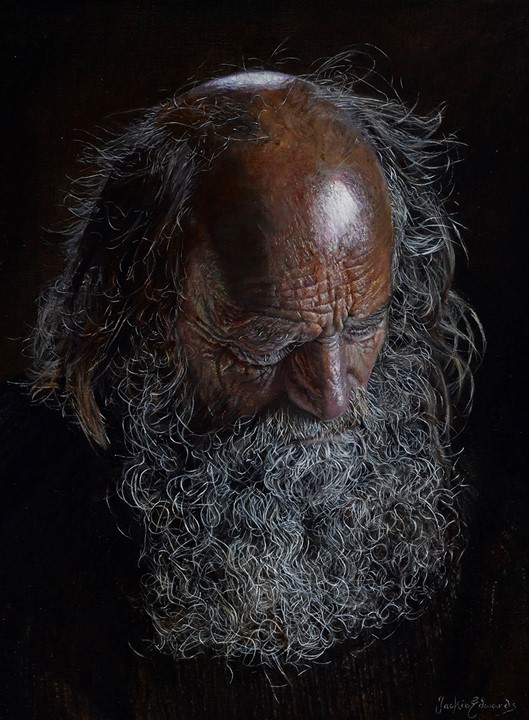 Jackie Edwards, The Heart that Asks. Winner of the Portrait
Prize sponsored by Ross’s Fine Art Auctioneers & Valuers.
Attending the Dun Laoghaire School of Art and Design, her passion for portraiture and figurative work developed from a young age, selling her first piece at just 15. Jackie’s dedication to classical techniques brought to life with modern themes has seen her previously win a double award at the Royal Ulster Academy in 2015, and enabled her to exhibit since 1989 across the UK and Europe. Expanding her talents beyond this form of visual art, her ‘Noir’ series is also worth noting. By applying the medium of charcoal to a number of figurative works, she attempts to covey her own sense of raw emotion.
Aside from being on show currently at the Ulster Museum, along with the rest of the exhibition, you can view the artist’s work at her own website; http://www.jackieedwardsart.com/ 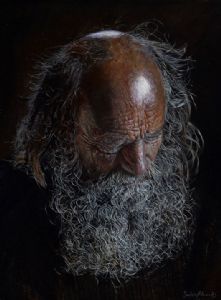