The death of much loved Ulster born artist Basil Blackshaw (1932-2016) was a point of realisation for his many devoted followers. With a career that spanned six decades, the impact he had on Irish painting is hard to miss, yet still he remains a relatively unknown artist internationally.

Irish art critic Brian Fallon, in one of several articles about the artist, spoke of Basil’s undeniable yet somewhat unappreciated gift;

‘Blackshaw in my opinion is an artist of European size whom the Venice Biennale, or some other prestige exhibition, should by now have honoured as a living master.’ (Brian Fallon, ‘From the Maddening Crowd’ 2012 Irish Arts Review)

Being compared to Jack Yeats for his skill in capturing the likeness of animals, his talent has been critically acclaimed consistently over his career, if only within Ireland and the UK.

Various pieces on Blackshaw have emphasised how he was a very private and elusive man, without media presence. Whilst it is true that he showed little interest in self-promotion and marketing of his works, he was far from being a reclusive man. His career may have been painting, but this was not his only passion in life, and so he chose not to devote his time engaging in the media surrounding his work. Coupled with Blackshaw’s reluctance to travel from his home in Antrim, this modest attitude may have contributed to his limited recognition as an artist.

Being brought up in the countryside and having a horse breeder for a father were decisive factors in forming the artists’ creative disposition. A feeling of deep affinity and love for the natural world has been ever present in so many of Basil’s paintings, allowing his followers a glimpse into his mind and passions.

This empathy with animals, especially dogs and horses, influenced his subject matter so often that it became almost habitual. His pieces may have featured fixed inanimate images, but to those who understood his work, they appear alive.

His ability to capture the soul and movement of the animals he painted is an undeniable talent that many have recognised in Blackshaw, however it is his ability to stay relevant and to evolve that has captured the praise of critics.
Studying at the Belfast College of Art (1948-1951), he had success in his early career and was immediately recognised by John Hewitt who purchased The Field for the Ulster Museum while Blackshaw was still in his twenties. Despite various peaks and troughs within his 60 years of producing work, his early expressionist style was one that caught the attention of a devoted following.

A skilled draughtsman as well as having a great understanding of how to handle paint, Blackshaw is well recognised for his technical ability. Yet it is his capacity for progression, creatively and in subject matter that truly makes him stand out from other Irish artists. What makes Blackshaw stand apart is the integrity in his work. He never tackled a painting without an intimate understanding of the subject whether figurative or landscape.

The portraits he created are an example of his versatility, great in their own right and in style, such as that of playwright Brian Friel or Archbishop George Otto Simms. Influenced by Cezanne, his landscapes reflect a deep understanding of the light, the sounds and the smells of the damp Ulster countryside.

As he entered the later stages of his career a change came over the artist in terms of his use of colour.  His talent as a colourist became the main feature in many of his pieces with a new almost naïve approach.

Fallon discusses this along with his largely successful and inspiring nude series;

‘Above all, his colour sense was virtually transformed and became extraordinarily rich, fecund and luminous, while the brushwork took on a life of its own. All this did not, of course, take place overnight, but the fact remains that inside a surprisingly short interval of time, a highly gifted artist more or less re-created himself into a major one. One form this took was a new interest in the nude, which had never up till then been one of Blackshaw’s main preoccupations.’

Even after so many years of proving himself a consistently talented and adaptable artist, he showed he had yet another dimension to his artistic capabilities when he entered his minimalist stage. This development in his work typified Basil’s ability to amaze his following in a new and wonderful way, gripping their attention for years more to come. 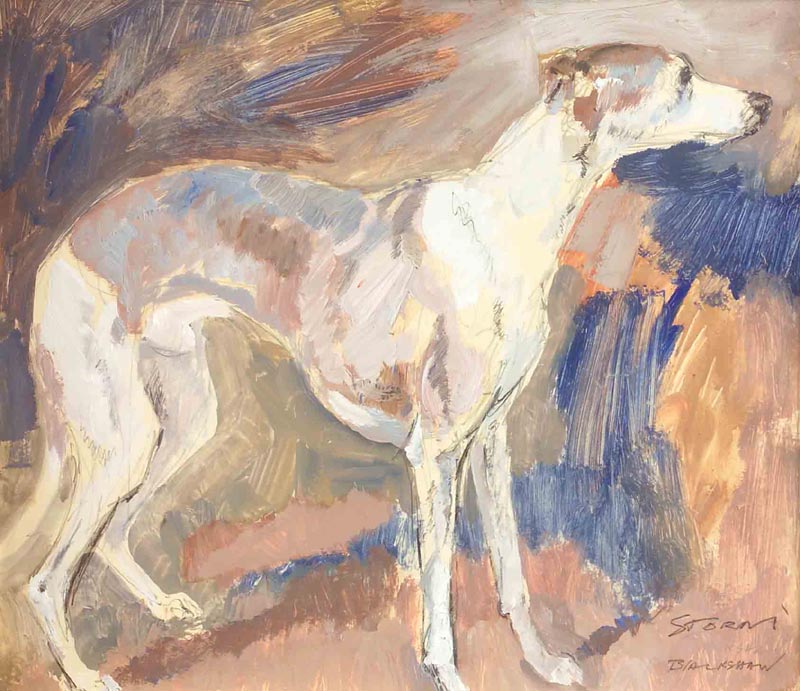 Storm, a Lurcher bred and owned by Blackshaw.

Many of his inspirations may derive from international sources, but it is his local environment at home in rural Antrim, that really takes centre stage. Taking the familiar and interpreting it with something wider was the approach that brought Blackshaw recognition amongst his peers. His connection with and understanding of Irish landscape and rural living put him on the artistic map, but his departure from his own standard is what pushed him beyond this. 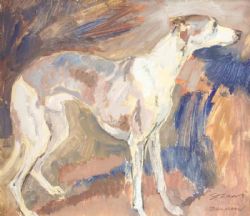