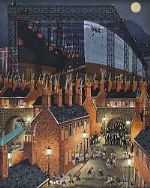 George Callaghan was born in Belfast, Northern Ireland in 1941. Whilst he briefly attended a local primary school, his family emigrated to South Africa when he was four, only to return to Northern Ireland just a decade later due to the impending death of his grandfather. Callaghan attended Ashfield Secondary Intermediate School where his artistic ability was already evident, where his art teacher, Desmond Kinney, succeeded in securing thirteen periods of art each week for the promising student. However, Callaghan’s experience at school was short-lived and he soon moved to the world of work at the age of fifteen.

A master of discipline and style, Callaghan’s early roots in the advertising industry are identifiable throughout his work. As an apprentice commercial artist at local printers Nicholson and Bass, Callaghan was very strongly influenced by his mentor Robin Holmes, who gave him the solid base of support and experience upon which he built a very successful career in advertising in Dublin, London and later Sydney. Whilst his career in the field ended at the age of thirty-two, Callaghan’s background in design and advertising is heavily invested in his work; his love of strong lines and flat perspectives dominate his idyllic countryside scenes and bustling cityscapes alike.

Following his move from the world of advertising, Callaghan settled in Tasmania where he pursued his love for art and music further. A reputable harp maker and player, Callaghan’s identity as an artist encompasses not only his work as a painter but also as a committed luthier and all-round musician; identities which are strongly interchangeable and indivisible, according to Callaghan. Such fluid characteristics are a trademark of the artist’s work. Reoccurring patterns and shapes anchor every picture, from scenes of Belfast shipyard workers to mazes of the medieval streets of Lherm, France, the artist’s inherent lyricism pervades every scene and his excitement for the ‘repetitive gestalt’ is tangible.

Callaghan’s work is most definitely in a category of its own; a category which the artist would label as ‘sophisticated naïve’ in style. Parallels can be drawn with Stanley Spencer’s preoccupation with repetition, Grant Wood’s localised surrealism and closer to home, Desmond Kinney’s undulating, cartoon-like hills and mountains. However, Callaghan’s trademark quirky style is undeniably unique and his preoccupation with infusing a sense of movement into the most static of scenes, in addition to his disciplined dedication to strong lines, culminate in heavenly pieces of idyllic, other-world aestheticism. Callaghan’s distinctive style is indicative of his uncompromising rejection of the regimented, artificial ‘teaching’ of art. Having attended the Belfast College of Art on a scholarship at the age of sixteen, Callaghan is quite clear that he ‘learnt nothing whatsoever…from any teachers’.