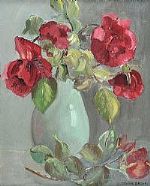 Deborah Brown was a Northern Irish sculptor born in Belfast 1927. In the 1960’s, Deborah had established herself as one of the country’s foremost sculptors and she also began exploring fibre glass as a medium. As a child, she spent many years in the Glens of Antrim and so became well accustomed to nature. During the 2nd World War, she studied landscape painting and then moved to Paris where her work began to diversify.

From 1951 onwards, Brown has had many solo exhibitions in countries including Ireland, England, Scotland and Canada. In 1982, major shows were organized for her pieces in the Ulster Museum and The Hugh Lane, Dublin City Gallery.