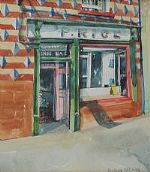 Barbara Allen is an accomplished watercolour artist and a four time winner of the John Ross Watercolour prize at the Royal Ulster Academy. She was born in Belfast in 1959 where she went on to study art at the University of Ulster, graduating with a BA(Hons) in Graphic Design and a Post Graduate Diploma. It was during Barbara’s postgraduate study that she was able to focus on a topic she has expressed great interest in, Georgian architecture. Exploring her fascination with architectural heritage has seen the artist produce works such as Georgian Doorway and Coothill. More recently her art work has seen a redirection of subject matter towards watercolours of fish, birds and boats. She has attributed this to a trip to Portmore Pier at Malin Head where she felt inspired by the fishermen there and their daily catch.
Allen’s work is featured with the Royal Ulster Academy annually and has been exhibited as part of collections in venues such as the University of Limerick and the White House. She has also had paintings displayed on BBC television and held a major one-woman show in Bergen, Norway.