Back to Auction | Prev Lot / Next Lot 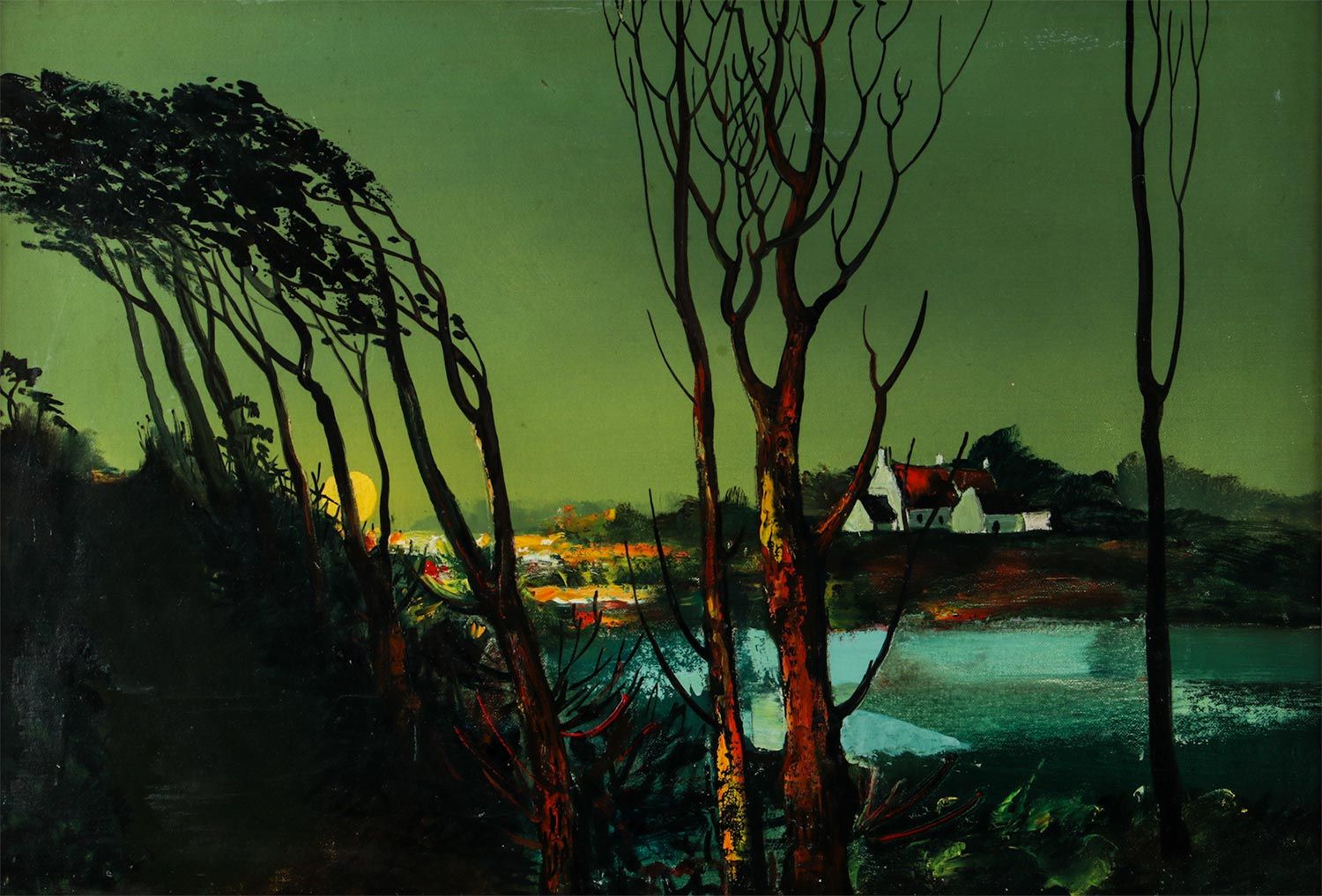 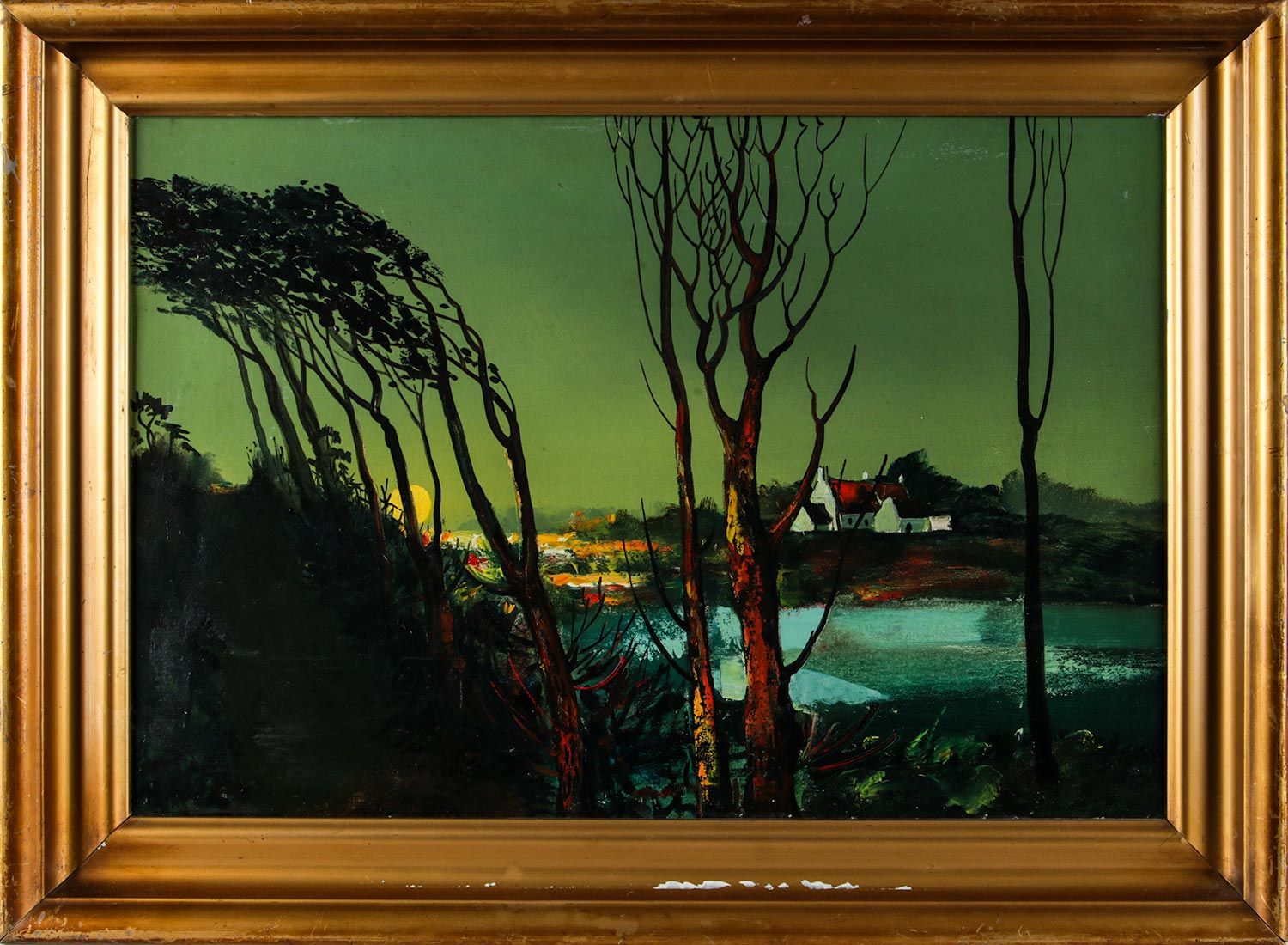 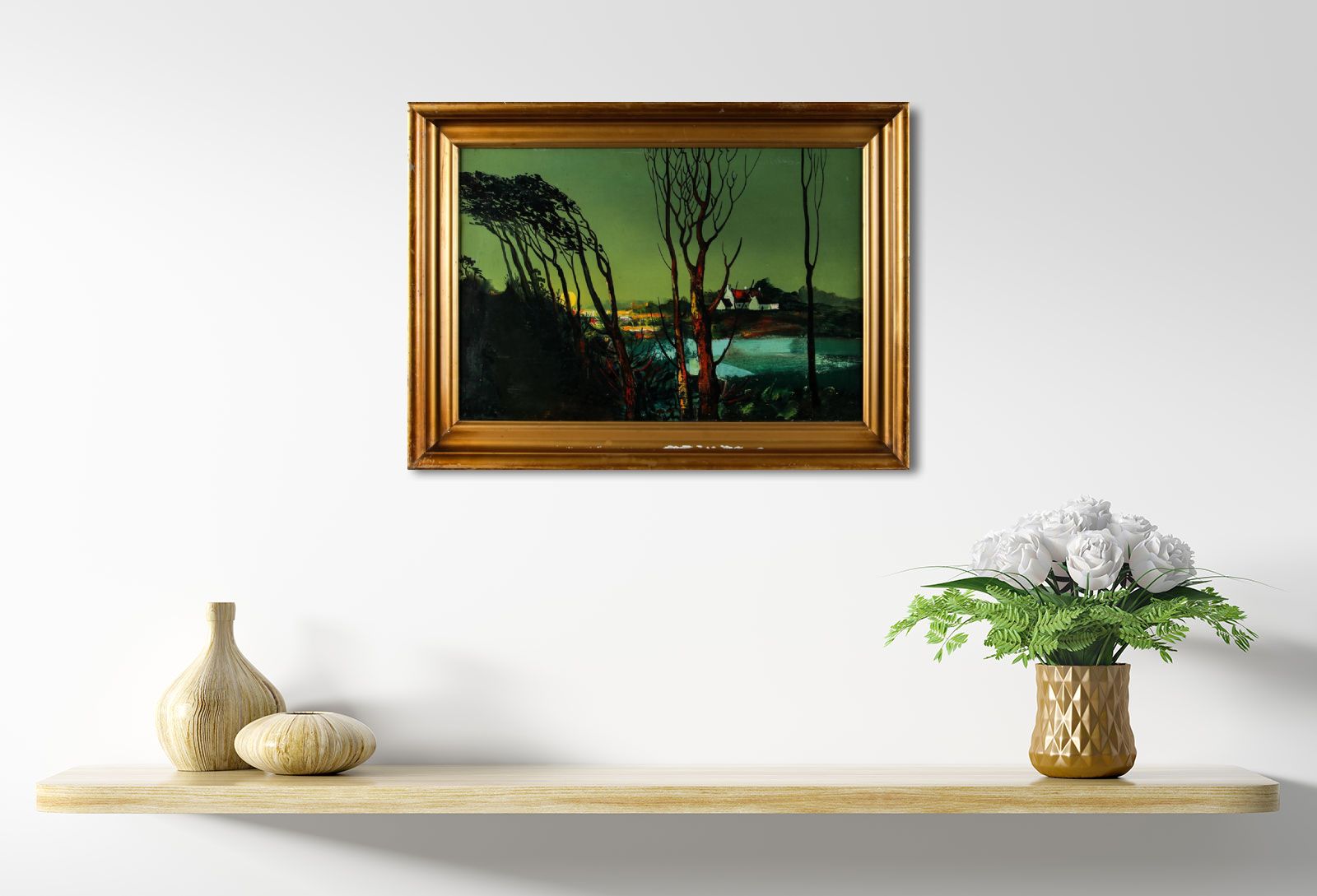 This painting, from the collection of the late John Phillips, show motifs from Daniel O'Neill's landscapes in the 1950s. The shadowy light, moon, and surreal forms of the trees date to the time he was living with his then partner Sheilagh Deacon in the area of Tyrella in County Down. O'Neill typically did not paint outdoors but was cited by neighbours in the area on his bicycle loaded down with sketching material making on the spot drawings which he later transferred to oils on hardboard. Other landscapes reflecting dead tree stumps, rocks in sparkling water, hay fields, and wilted stalks were elements in the natural world which O'Neill adapted to act as a visual language to express his intense feelings at that time. The viewer is attracted to moonlight as it casts a strange ethereal glow over an isolated farm by a lake. Bold colour is visible through stooping and elongated trees whose shapes create a theatrical atmosphere transcending reality into another unearthly world.

Evening Landscape, Co. Down comes with a handwritten note dated 17 October, 2000 from John Phillips, explaining the provenance of the painting. Philips recounts how he learned through his friendship with Sheilagh Deacon in the 1970s that Daniel O'Neill had left pictures with her before traveling to London in 1958. Commenting on this painting, John Philips stated;

This canvas was never signed because O'Neill never finished it: there is
an area at the left of the picture which has been overpainted, and from
which the paint was removed. It is a matter for spectators as to what O'Neill
had in mind to fill the space; probably a figure, or figures. Sheilagh Deacon
told me she thought the painting was made at Ardglass in Co. Down,
N.[Northern] Ireland. The sky is very typical of O'Neill's Irish landscapes.
I like the mystic qualities of the pictures, and for a time had it up
hanging without a frame.

Although Phillips believed the painting dated from the late 1940s or early 1950s, evidence of the work being produced later is linked to the painting being on canvas. After Waddington held his 1956 farewell exhibition in his Dublin South Anne Street Gallery, he had by this time concluded business arrangements with gallery painters which also included supplying them with painting material and equipment. O'Neill, however, continued to be represented by Waddington who reportedly supplied him with Windsor & Newton canvas to tie him over until he had settled into his new studio in London.

In an interview with John Phillips in 2015 he told this writer that Sheilagh Deacon and O'Neill remained friends after the relationship ended. In these series of landscapes O'Neill seemed challenged by a pursuit to use the natural world around him as a device to make the viewer see the ordinary or mundane enthralling.

Condition: FRAME IS DAMAGED
*Purchase of this lot will be subject to payment of the Artist's Resale Rights levy. Royalties will be calculated at 4% of the hammer price.
Enquire
Have one to sell? Get an Online Valuation